My wife and I have allergies and typically begin the day downstairs in our home with multiple sneezes. I purchased this based upon the strong reviews in Consumer Reports and it has had a very positive impact on our allergies. Instead of sneezing many times during the day, we now breathe better. I purchased an excellent Kenmore HEPA vacuum and between the two, my wife and I rarely sneeze more than once a day. I run it full speed when running the furnace and shut it off after my home is at the desired temperature. I typically don't run it again until the next morning.

I have been trying to get rid of a dank smell in a storage room for about a month. I tried running a fan for days, I tried vacuuming with baking soda several times and I even tried putting a bowl of vinegar to see if the smell would go away. Then my friend’s husband suggested an air ionizer. I researched it and then actually decided on this Blueair air purifier instead. Blueair is ranked no.1 on Consumer reports. The unit came today, I was anxious to plug it in. I am not joking when I tell you the storage room smell disappeared in less than 60 seconds. It really truly works. 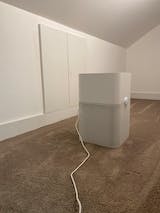 The product work as advertised. I have 3 cats and it picked up the fur well. My cats seem to enjoy it more than me because of the foam boxes. They sleep there all the time! 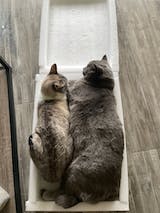 I purchased this in December and it's been running in my bedroom for 2 full months now, long enough to have evaluated it and be able to give a review. In the winter when the windows are mostly closed and with 2 cats in the room I had been suffering every night and would wake up congested, sneezing and in discomfort frequently. That cleared up immediately after starting to use this purifier. I have washed and replaced the cloth pre-filter twice; it's pretty obvious when it starts getting dusty. I haven't changed the internal filter as yet but a visual examination shows that after 2 months it still looks like it's in good shape. I like the fact that the machine will indicate when to get a new internal filter and then will indicate again when to change it. IDK if that's on a timer or based on reduced airflow due to the filter clogging up.I've moved it into another room and set it on high when dusting and cleaning and you can see the dust motes in a ray of sunshine decrease substantially, noticeably and quickly.I got it based on recommendations and reviews and really couldn't be happier.

I did an exhaustive amount of research on air purifiers and ultimately landed on this BlueAir model. I would have paid $500+ for it vs the marketing scheme that Dyson is. Within ONE hour of letting it run on high for the first time, the air in half of our condo smelled CRISP! You know how every house has its own unique smell? Well, ours now has a pleasant smell thanks to BlueAir.This post is reflective of our 14 day experience:Health issue #1 solved: I have had post-nasal drip nearly my entire adult life. Unbearable to the point of choking. The amount of post-nasal drip has been practically eliminated!! It is springtime and I do have a pollen allergy so let’s not pretend the BlueAir eradicated my post-nasal drip altogether. However, this has been a huge win for me (bless you, BlueAir).Health issue #2 solved: my husband constantly rubs his eyes from allergies. He’s been ranting and raving about how he hasn’t rubbed his eyes at home anymore.Easy to clean & relocate: machine is 100% portable and surprisingly light. I didn’t know how much it weighed and I had to move it on my own, braced myself for how heavy it would be and I basically threw the machine in the air. We vacuumed the mesh/bra/underwear on the bottom for the first time in 2wks and I was disgusted by how much dust it collected! Disgusted in the best kind of way- who knew disgust could feel this good?Noise: not going to lie, the high setting basically sounds like a bathroom exhaust fan and depending on what you’re doing at home (watching TV), it could be distracting. The low setting; however, is like a Prius driving by. You could hear a pin drop.We are so much happier with BlueAir in our home!

11 minutes ago from Portland, OR.
Madison purchased a

13 minutes ago from Boise, ID.
Emma purchased a

18 minutes ago from Phoenix, AZ.
Jackson purchased a

8 minutes ago from Austin, TX.
Aiden purchased a

8 minutes ago from Los Angeles, CA.
Ava purchased a

15 minutes ago from Cheyenne, WY.
Liam purchased a

16 minutes ago from Atlanta, GA.
Mia purchased a

8 minutes ago from Portland, ME.
Lucas purchased a

7 minutes ago from Denver, CO.
Isabella purchased a

16 minutes ago from Hartford, CT.
Noah purchased a

17 minutes ago from Topeka, KS.
Zoe purchased a

10 minutes ago from Boston, MA.
Mason purchased a

10 minutes ago from St. Paul, MN.
Lily purchased a

13 minutes ago from San Diego, CA.
Ethan purchased a

2 minutes ago from Harrisburg, PA.
Caden purchased a

6 minutes ago from Albany, NY.
Logan purchased a

3 minutes ago from Santa Maria, CA.
Emily purchased a

17 minutes ago from Portland, OR.
Bryan purchased a

5 minutes ago from Boise, ID.
Nicholas purchased a

17 minutes ago from Phoenix, AZ.