I am really excited about our new Hatch Restore. We have the Hatch Rest for our kids and recommend them to all parents, so I was hoping they would create an adult version. The Restore exceeded my expectations. The set up was really easy and it is customizable to our tastes in every way. I appreciate the meditation options and the variety of sounds. It is sleek and I love the soft-appearance of the clock so I can have it on my bedside table. I can already tell a difference in the soundness of my sleep. So happy! 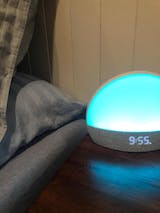 So pleasantly surprised to finally find a simple bedside lamp that combines so many useful features to get me to sleep fast and wake me up so easily and fully rested! The white noise sounds block out all outside sounds and helps me drift away to the best sleep ever. Then the magic of the sunrise alarm gradually brightens to wake me up in the morning without the jolting and blasting of my old alarm clock. And it looks so cute beside my bed. I just love my Restore!! 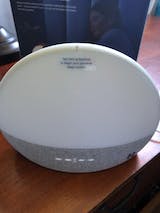 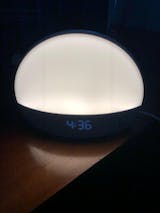 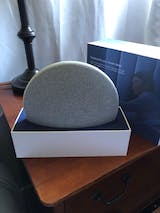 I'm a huge fan of Hatch products and was really excited to hear they have a product specifically for adults now. Since quarantine started i've been trying to spruce up my room. I really like how I can use this as a light when I need to get up in the middle of the night. I sleep with white noise or rain sounds almost every night and I find the sounds to be relaxing. Definitely worth investing in good quality sleep

J
Jillian Mason
The inventor of this should be SO PROUD

I am obsessed with this. It is everything I expected (from the IG ads I watched again and again), and more. There are a lot of color options to choose from and the range of brightness level and volumn is impressive. I did purchase the in-app upgrade to have more access to a larger library of sleep meditations. The options for everything (type of alarm, duration of sunrise and brightness, sounds to hear while reading or meditating, etc.) are impressive. The clock display can be dimmed or even shut off on a schedule. I love experimenting with my "sleep routine" and waking options. I will say, setting it up had me a little panicked: I have terrible cell service at home, so while my wi-fi is strong, I still had to coordinate the app for installation with the hatch with my internet, using my phone, and it took many tries. I think this is specific to my location/service provider, so not a Hatch complaint, and I mention it only as encouragement. I just kept trying and it did ultimately all come together (and I didn't have to contact customer service or anything), and I have had no issues since. Plus, it just looks nice. I actually don't even use a lamp on my nightstand now. And, there are buttons on sides to manually adjust brightness and volume, so I can shut my phone right off at night. And the nighttime routine steps can be skipped or restarted simply by tapping the top, so if I want to skip reading, or a meditation, or shut off the white noise or adjust any of my other selections, it is easy and doesn't require getting into the app with my phone. This helps me avoid night time rabbit-holes on the internet and just get to sleep! Love it!

I realize my reviews get a big long, so the readers digest version is this: If you want a better night sleep, if you want to wake up feeling good, and if you don’t want waking up feel like you just got birthed from an alien body, get a Hatch Restore. It has all the bells and whistles that the other brands are missing. Okay now onto my story:After about a year of searching, comparing, reading and researching, I finally settled on the Hatch for my bedside alarm clock and I’m sooooo glad I did. It was a painstaking process, so I thought I’d share with everyone my experience, to maybe save you the trouble. It starts with a quick story: I moved from California to Washington about 3 years ago under the lie that “it doesn’t rain much here!” Oh. Yes. It. Does. And when it’s not raining, it’s gloomy and overcast (BUT not dry and brown, so there is that). So the first thing I did was buy a SAD lamp (yes I was in fact sad, but really this stands for seasonal affective disorder - real thing). It helped, but I noticed I was still waking up less then rested and had a really hard time getting going in the morning. A friend suggested I stop reading things on my phone late at night and put it far away from the bed to charge. But I used my phone as white noise to fall asleep as well as my alarm clock, so to do that, I needed to get a different solution for these things. This same friend suggested a light therapy alarm clock that would “ease me into my day”. Sounded perfect (although I have to admit, it really just eases me into my coffee, which eases me into my day, details).After comparing, I’m not kidding, like 10 therapy light alarm clocks, I found that all them were missing something. Either the clock light didn’t dim, or I couldn’t control the alarm time for different days of the week, or the light setting was limited (one color, or one speed, or no control over brightness), or it had the light feature but no sound feature, or no smart phone app. There was always something that I didn’t like. I first evaluated the lower price point options, and quickly threw those out (what’s the point if it doesn’t do what you want?), and then moved on to the higher priced one. The closest one to the Hatch was Lumie and Philips – but either there was no iphone app for easy control, a fraction of the sounds available, no mediation readings, less light cycle options, and both more expensive. Per the excel sheet I put together to compare (yes, I did that), the hatch was an obvious and easy choice.All of what is advertised came true and I love it! And the proof of its therapeutic success is my FitBit app who says my “sleep score” went from an average of below 70% to In the 80%’s the first week I started using it. And I read below how someone said they hit the light on in the middle of the night when reaching for water – I just don’t get that, just put your water glass in front of your Hatch – problem solved. I have had zero issues so far (the only tiny issue was I had a little trouble pairing it – but I just uninstalled and reinstalled the app and it worked fine. I think this was because I downloaded the app and searched for a product before I actually had it, which may have confused my phones Bluetooth – so don’t do that).5 stars from me. I love it. 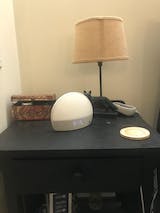 17 minutes ago from Portland, OR.
Madison purchased a

13 minutes ago from Boise, ID.
Emma purchased a

13 minutes ago from Phoenix, AZ.
Jackson purchased a

8 minutes ago from Austin, TX.
Aiden purchased a

11 minutes ago from Los Angeles, CA.
Ava purchased a

10 minutes ago from Cheyenne, WY.
Liam purchased a

10 minutes ago from Atlanta, GA.
Mia purchased a

3 minutes ago from Portland, ME.
Lucas purchased a

19 minutes ago from Denver, CO.
Isabella purchased a

10 minutes ago from Hartford, CT.
Noah purchased a

9 minutes ago from Topeka, KS.
Zoe purchased a

7 minutes ago from Boston, MA.
Mason purchased a

13 minutes ago from St. Paul, MN.
Lily purchased a

19 minutes ago from San Diego, CA.
Ethan purchased a

3 minutes ago from Harrisburg, PA.
Caden purchased a

11 minutes ago from Albany, NY.
Logan purchased a

17 minutes ago from Santa Maria, CA.
Emily purchased a

16 minutes ago from Portland, OR.
Bryan purchased a

2 minutes ago from Boise, ID.
Nicholas purchased a

5 minutes ago from Phoenix, AZ.